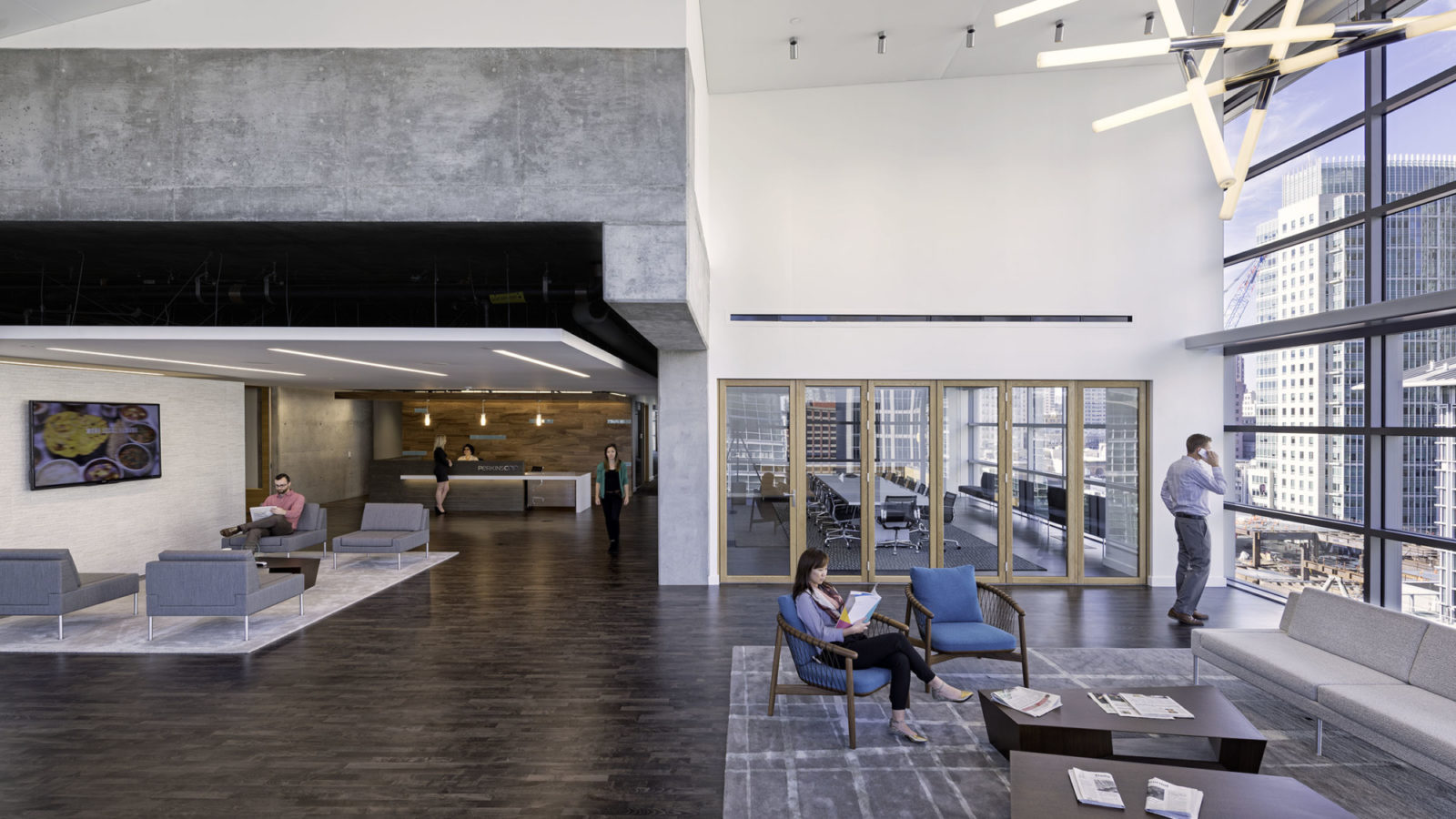 Tell us about your history with Perkins Coie.

Peter:  I started working with Perkins Coie here in San Francisco on Townsend Street. They were opening up a South of Market office to be closer to the tech industry. We did that office and then I did their Menlo Park office. A couple of years later, Tom began work on their Seattle headquarters. Here in California, Perkins was talking to me about moving from Menlo Park to Palo Alto. Meanwhile, they had given up their space on Townsend. They really liked it there, but they grew out of the space. That's how the relationship got started.

How was the design of this space elevated from a traditional law firm design?

Karen: Perkins Coie wanted a high-tech vibe, but they also wanted their space to feel timeless. By keeping a lot of the concrete structure exposed, they achieved a unique approach for the design of their space.

Thomas: Although it is a techy looking space, it's elegant, it's clean, it's eclectic without being too trendy. It is slightly different from some of the other spaces we are doing for our tech clients in SF and East Bay. It will last longer with its classic design and its mix of traditional and contemporary elements. Looking forward into the future, who knows what law firms will look like. Every project we do informs the next one, and every one's a little different.

How did Perkins Coie draw inspiration from the space itself?

Thomas: A nice thing about this project is that we worked with them to harness the building's inherent characteristics: the tall space, the concrete, the raised floor, all those things. They embraced it fully.

Karen: Aesthetically, they embraced the base building elements - everything from the exposed concrete to leaving all of the ducts exposed. They also wanted the space to tie back into the Bay Area, so we used elm trees that were from San Jose State for their board room table, elevator lobbies, and reception area.

Thomas: We started listening to them first. A lot of clients will say certain things about their aspirational objectives for a project, but how that gets manifested in the final result is an interpretation on our part. The first thing we do is listen to them, because that's how it should be. Then they listened to our ideas and adopted some of our suggestions on how to utilize the space.

Do the various locations differ in terms of design?

Thomas:  We have seen the firm evolve and that's shown us how the practice has really changed. The libraries have downsized the workstation ratios. The support ratios have really changed in general. We have also been pushing one size offices for a long time for our partners and associate partners. This office is the first place that bought into that.

Karen: Perkins Coie chose to take the approach of one size offices for all attorneys. This allowed them to increase the number of perimeter offices that the building could accommodate and gave them additional flexibility as they grow.

How does the universal office size benefit the attorneys?

Karen: Single size offices are still seen as a fairly progressive approach for attorneys because many lawyers still have the mindset that they should be rewarded with larger offices as they climb the ladder.

Thomas: When it came to looking at this space, they were open to some of the more innovative things that would make them more effective and would use the space more efficiently. It would also create more flexibility because law firms’ spaces are currently pretty inflexible because of all the partitions.

Is employee interaction promoted in the space?

Do you see more collaborative areas as a possible shift for law firms?

Peter: In the law firm world, I think New York and San Francisco are probably the most progressive. In the Bay Area, a lot of the firms are influenced by their Silicon Valley clients.

What made Perkins Coie open to innovation? Is this what you are seeing with other firms?

Thomas: The firm has an open management style. They allow the different offices to take on different personalities. The folks who led the project really focused on making the firm feel more like a high-tech environment, because it's all high-tech around here.

Peter: Which is part of the reason why they came back to San Francisco in the first place.

Thomas: Across the board, you have the pretty conservative firms, you have the in-betweens, and you have the renegades trying to say, "Let's just strip the whole thing down to its core and rebuild it as a place to work, not a place to be not a status symbol.

Are there other areas in the space uncommon for a law firm?

Karen: Perkins Coie wanted to explore the idea of a shared, open, and collaborative environment for their attorneys. We took what would have been three perimeter offices and made it into a single, large collaborative area. In this area, we accommodated 4 to 6 attorneys. We incorporated support spaces such as lockers, a phone room, and shared collaborative meeting areas along with the individual attorney workspaces into this open environment.

In the Bay Area, businesses are focusing more on modern and innovative workspaces to attract and retain talent. Do you feel this is happening with law firms?

Thomas: Yes. There's a lot of folks coming out of law school. They believe they're going to work somewhere for three to five years and then make partner. Along the way comes the perks. Compensation, stature, office, private office-- those all play into the recruiting process quite a bit. The office scene and the physical environment is a huge part of the decision making process.

Elaborate on the idea of transparency in the office.

Thomas: What you see here are steps toward transparency, collaboration, working in teams, trying to cut the barrier between attorneys and non-attorneys. They kind of mix that up a little bit. So you see some of that here, plus the combined offices, and some other innovative things.

Now that the project is complete, what kind of feedback are you receiving?

Karen: I remember talking to them shortly after people moved in and they just started raving about the feedback that they were getting. Employees were commenting on the coolness of the blues, the warmth of the woods, and the overall functionality of the space. The office felt really comfortable and efficient. We received a lot of very positive feedback, which is always our goal.

To learn more about this project, check out the Perkins Coie project profile!